Trinity Mar Thoma Church was established in the year 1974. It is the first Church built in USA by the early immigrant Marthomites. Sevika Sanghom started its ministries from the very inception of the parish in the late 1970s. The Sevika Sanghom Sakha of the parish was officially inaugurated on June 24, 1979. Rev. T.J Thomas, the then vicar, took the initiative and a committee was elected on the same day to steer the ministries of the Sangahm in the parish. Sevika Sanghom was a soothing and strengthening spiritual fellowship for the early immigrant women who had to face a lot of cultural, economic, and occupational challenges in the beginning years of their life in the United States. The visit of late Mrs. Dr. Annamma George, the baskiamo of late Rev Dr. K. K. George and the then Sevika Sangham General Secretary, to Houston Trinity MTC on Sunday, June 24, 1979 was a real boost to the activities and an inspiration to the proper organization of the Sangham in the parish. Trinity Mar Thoma Church Sevika Sanghom is an active organization that plays a vital role in the spiritual and ministerial growth of the church.  Fundraiser events at that time were through a bake sale and deppy pirivu (piggy bank collection). Late Mrs. K.K. George visited Houston on Sunday, June 24, 1979.

First Sevika Sanghom Committee was formed on Sunday, June 24, 1979. Late Mrs. Grace Joseph, the wife of the vicar late Rev. T. I. Joseph, was authorized to coordinate the meetings and activities of Sevika Sanghom. The Trinity Mar Thoma Sevika Sanghom participated in all the Sevika Sanghom collections since 1979. Sevika Sanghom meetings were held regularly since 1981 after the arrival of Very Rev. P. V. Thomas, the first resident vicar of the parish.

The Trinity Mar Thoma Sevika Sanghom conducts bible study on the first or second week of Saturday of every month at church and cottage prayer on the third Thursday of every month. The Sanghom strive to provide comfort and encourage others to join in the fellowship. The Sanghom occasionally arrange to visit the sick and elderly members of our church. The Sevika Sanghom organizes various activities such as retreats and competitions to encourage and inspire the community to follow Christ. It involves in charitable activities, especially by extending educational and medical assistance. 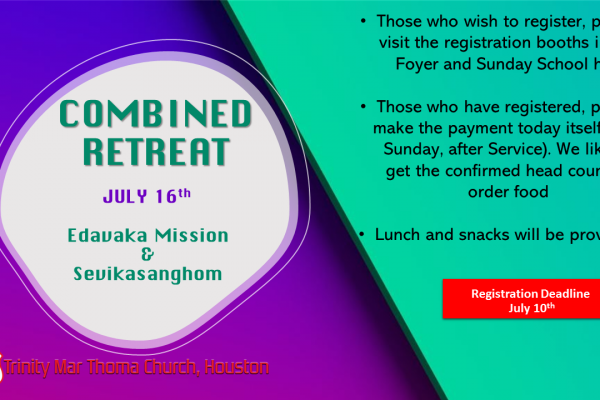 Thank you very much for the support and prayers for the combined retreat of Edavaka Mission and Sevikasanghom to be held on 16th July,2022 at […]